Blushing Books author, Louise Taylor, is with me today.  Not only does she share Spanking the Heiress, but she provides me with an author interview, which I’m happy to get to know her better.  She has a new release too, Having Faith (The Ruttingdon Series Book 3).  If you like Victorian era historical romance, you should check her out. 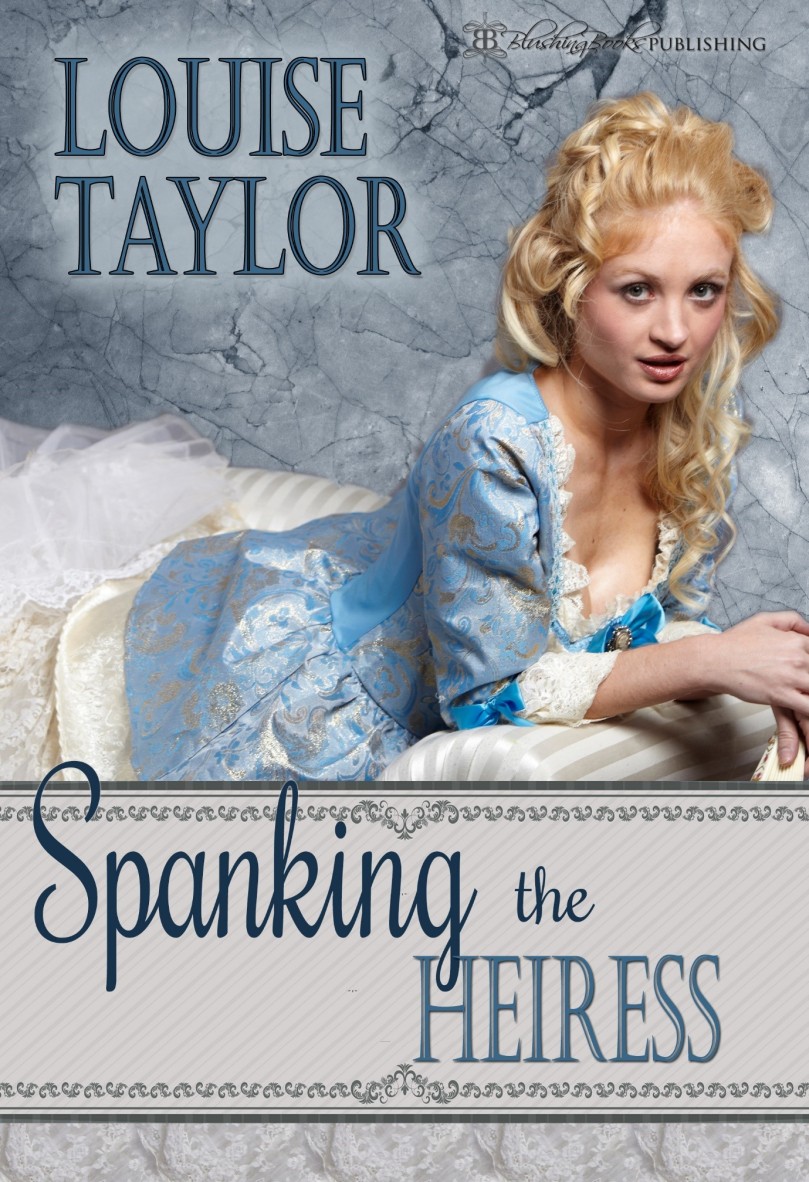 Anthony Carstairs, Earl of Beaumont, has seven sisters and very little money to provide for their dowries, dresses, and dreams of good society marriages. An unexpected inheritance from a distant relative is an absolute godsend for the cash-strapped earl. The estate he will inherit, however, is located in far-off Cornwall. There is a rather rundown manor house, as well as an uninhabitable castle overlooking the sea, along with some good farmland, so the earl’s first thought is to sell the place for much needed funds.

For Jennifer Polperran, current occupant of the house and lands in question, the earl’s inheritance means that she has lost her home. Her adopted father had little else to leave her, so she must either marry a much-loathed neighbor, Sir Alec Salcombe, or live in extremely reduced circumstances.

But for all her life, Jennifer’s father had told her of an ancient legend, of a fortune in gold and jewels stolen by two star-crossed lovers and hidden away somewhere on the estate just before their tragic and untimely deaths. Many had sought the treasure over the centuries, but Jennifer might just have found the key to its location, if only she could get the new owner’s consent, and perhaps even cooperation in finding it.

Convincing the Earl of Beaumont to give her leave to stay and search proves less difficult than she imagined. But their way is fraught with disappointment and peril, not the least of which is caused by the ruthless and rapacious Sir Alec. But romance quickly blossoms between the earl and the penniless Jennifer, and together they persevere in the hunt that is their best hope for a bright, golden future together.

Q) How did you dream up the dynamics of your characters?

This is something that I agonise over, actually! I write historical romances, set in the Victorian era, which covers the majority of the nineteenth century. I strive for historical accuracy, but I am aware that women of that period were not encouraged to be independent and use their intelligence. I don’t know about my readers, but I’m not keen to read about women being limited in that way. Too many real women in 2016 suffer from those same strictures for me to be comfortable creating fictional heroines who placidly accept it. I need a heroine to be someone I can respect, and I respect women who try to use whatever abilities they have in order to achieve something in life.

Of course, this is tricky when you’re writing spanking romances! They’re all about power exchange, which I insist on being consensual. So, my heroine has to be independent and take-charge, but completely willing to be dominated by a hero who is alpha-male enough to be in control, but self-aware enough to know that submission is sweeter when it is given, not taken.

In Spanking The Heiress, my third novel, my heroine Jennifer is in a bad position as her father has died, leaving her homeless. The Earl of Beaumont, the man who has inherited her home, needs to sell it in order to provide enough money to shore up a failing estate. He is uncomfortable with the idea of throwing her out of her home, but he can’t help but notice how attractive she is. They have an instant attraction, but his position of power over her is strange for both of them.

Q) Is this book part of a series? If so, can you tell us about it?

It’s the third in a loose series – the heroes of the three books know each other socially and pop up here and there, but each book can be read as a standalone novel. Of course, I encourage everyone to read all three – Spanking The Governess, Spanking Miss Sophia and Spanking The Heiress!

Q) Can you give a fun or interesting fact about your book?

It is set in Cornwall, a county of England that my ancestors lived in before moving to Wales during the Industrial Revolution. They had worked in the tin mines until they closed, and then they switched to coal mining and working on the railways. The Cornish language is very close to Welsh, and in researching certain phrases I discovered just how much Cornish I could understand!

Q) What gave you the inspiration for your book?

Oh, every book I’ve ever read that included secret passages and buried treasure? When I was younger and watched the Indiana Jones films, I never wanted to be his girlfriend, no matter how pretty she was. I wanted to be Indy! I very much doubt I’ll ever find a secret passage in real life, but I can live vicariously through my characters…

Q) Do you have any habits that get you in the writing frame of mind?

Not so much, although I have discovered that I have to have warm feet. Nothing takes me out of the writing mood faster than cold feet!

Q) Do you plan all your characters out before you start a story or do they develop as you write?

I plan extensively – A3 paper sheets taped together with sprawling notes over them, post-it notes attached, pictures printed from the internet – and then they develop from that organically. They are mostly fleshed out before I start though. I can’t imagine writing without a detailed plan.

Q) How much real life do you put into or influences your books?

Very little, as my books are all historicals. I’m no Society lady, sadly! I do a lot of research though, to try and make them as realistic as I can.

Q) What are your upcoming projects?

On August 2nd I will have the first volume of my third Ruttingdon Series novel on release – Having Faith. The second volume, called Keeping Faith, will be released a month later, on September 3rd! It was so large that it had to be split into two!

Never trust the wrong man, especially with your heart. But how does one know ahead of time he is the wrong man?

In the case of innocent vicar’s daughter Faith Halstead, governess to a middle class family with a marriageable son, one only finds out he is a cad after it is too late. Now she is alone in the world, a fallen woman, facing a bleak and uncertain future.

While leaving London in disgrace, a chance encounter on the train lands Faith in front of the darkly dominant Duke of Buckingham. He is in search of a woman to serve as his slave at an upcoming Ruttingdon Club house party, and the shy, modest young woman has unaccountably captured his attention.

Desperate for any excuse not to return home to her harshly judgmental father, Faith rashly promises to serve as the duke’s absolute slave for a week, alone with him at secluded Ruttingdon Hall.

Will his dark and brutal desires and the oftentimes sweet pain he inflicts upon her ripe body drive her away, or will the awakening desires in her heart seduce her into staying longer with him – perhaps forever?

I live on the beautiful Welsh coast, and I love walking the cliff tops and visiting some of our wonderful historical ruins. I get my best ideas when I’m in the great outdoors and you can usually find me chasing after the piece of paper I’ve just scribbled my notes on!

I live in a late Victorian house with wonderfully high ceilings and no central heating – thank goodness for my fabulous fireplace! I’m owned by Alfred The Great, an enormous tom cat with very decided ideas about who gets to sit on the right side of the sofa and how long I am allowed to stay in bed in the morning.

Join me on social media here: