I’m so excited to feature Jane Henry’s first book, Begin Again, in her Bound to You trilogy on my blog today.  I know I will be heading over and purchasing my copy after this post.  Definitely can relate to the allure of dominant/submissive lifestyle and can’t wait to immerse myself in Meredith’s journey.

Thank you Jane for sharing on my blog.  Congratulations! 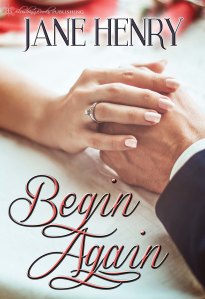 The day she stumbles upon a website forum of actual submissives and dominants, her life is forever changed. These are not characters created by authors. They are real people who engage in real life dominance and submission. As her knowledge grows, she learns there is one question only she can answer—is she truly submissive, or is the fantasy better left on the pages of a book?

In a last ditch effort to discover who she really is, Meredith agrees to pledge her obedience to an anonymous on-line Dom. She convinces herself it can’t be considered cheating if her Dom is just a faceless entity in cyberspace. But the first time she’s given an order, it all becomes too real. Will her devotion to please her on-line Dom take precedence over her flesh and blood husband? Will Meredith’s journey of self-discovery destroy their marriage or will they somehow find a way to begin again?

Meredith wondered. What would it feel like if she knew that Paolo was going to punish her for her outburst? Would she dread him coming in? She had no doubt that part of her would. Little Lady said that awaiting a punishment was brutal, and she’d rather take a spanking any day than wait for Master Winston to punish her. Meredith lay in bed, her eyes shut, allowing her imagination to flesh out the scene. She’d hear him come down the hall. He’d enter the room and approach her, his anger tempered, but a stern, intimidating glint in his eye.

“Stand,” he’d say, commanding her to get out of bed and come to face him. She’d obey. She wondered what that would feel like. Would she be nervous? Would she shake? He’d narrow his eyes at her. But it would be different than when he was furious at her. He’d be in control of himself. He wouldn’t be yelling. He’d be stern.

“Strip and lay over the bed,” he’d instruct. She’d obey. What would he use? Would he get a strap he kept hung in his closet? Would he fetch a paddle that lay hidden in a drawer? Would he take off his belt? Or use his hand?

He’d spank her. She imagined she’d flinch, and squirm. Decades of working as a carpenter gave Paolo enormous upper body strength, even if he was in a wheelchair, and she well knew, from the distant memories she had of the few times they wrestled in play, how quickly he could subdue her. Would he lecture her? For some reason, she’d want him to lecture her.

“Are you allowed to yell at me?” Swat!

Her mind froze, not knowing how she would respond. “No, Paolo? No? No Sir?”

“What happens when you disrespect me?”

It would hurt. Of course it would hurt. Maybe she’d even cry. Little Lady said she always cried, though it was more from the emotional impact of facing punishment than the actual pain of a spanking. Meredith imagined her crying, as Paolo continued to punish her.

But then. Then it would be over. Then he’d hug her. Then he’d forgive her. She wouldn’t feel this terrible guilt anymore, would she?

Available at Amazon and Blushing Books.